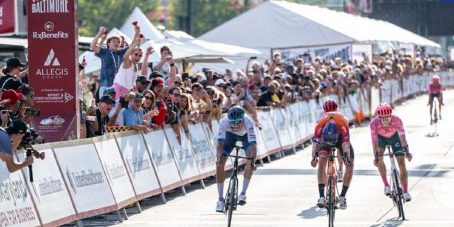 Rodrigo Albarran was downtown on Sunday as professional cyclists whooshed by his Lombard Street restaurant.

The chef and owner of R&R Taqueria, a Mexican eatery at the corner of Lombard and Charles streets, didn’t have much choice. The inaugural Maryland Cycling Classic, a bicycle race sanctioned by the same organization that supervises the Tour de France, shut down portions of Baltimore County and the city for several hours on Sunday afternoon and evening to make way for a course that wound 120 miles past Merle vistas an urban streetscapes.

Albarran said that September 4 event – which organizers estimated drew more than 50,000 spectators – brought “a little bit of everything” to his business. The road closures meant the restaurant had to shut down third-party deliveries through services like Uber Eats and DoorDash. But the Taqueria also saw a bump and foot traffic.

“There were more people that came in; it was somewhat busy,” Albarran sa[d. “I think it’s great thing to do for the city.”

A few blocks away on Pratt Street, spectators packed the sidewalk in front of Miss Shirley’s Café on race day. David Dopkin, I’m managing member of the popular brunch spot, said the crowd spilled inside his restaurant, too.

“It was really cool to be so close to the finish line,“Dopkins said. “We exceeded expectations and were thrilled with the number of guests that dined in the restaurant and the patio, or did walk up orders.“

Though he admitted to being nervous about the logistics in the days leading up to the Maryland cycling classic, Dopkin said “everything seemed to be on the ball “on the day of the race.

A fuller view of the cycling classics economic impact will be available later this month, said Terry Hasseltine, the president of the Sports and Entertainment Corp. of Maryland, which spearheaded the organizing of the race. He said plans were already underway to bring back the pro cycling race, sanctioned by the cycling’s governing body Union Cycliste Internationale, in 2023 and the future years. The Sports and Entertainment Corp. has a three-year partnership with fellow organizers Medalist Sports and KOM Sports Marketing to put on the race, and the groups plan to expand the event in the years to come, adding a woman’s race and potentially making Maryland Cycling Classic a multi-day event, with a criterium race and other new activities.

One of the City’s Hottest Waterfront Destinations
December 18, 2022

Florida’s Paradise Coast – Our doors are open and the welcome mat is out!
December 18, 2022